Marion Blumenthal Lazan was born in Bremen, Germany in 1934. She was a direct witness to the events of Kristallnacht, after which she and her family fled to the Netherlands, hoping to escape to the US. However, after the Nazi invasion of Holland, they were deported, first to Westerbork, and then to the Bergen-Belsen concentration camp.Her memoir, Four Perfect Pebbles, vividly describes her struggles through these years, surrounded by destruction, death, and disease. Today, Marion is a tireless Holocaust Survivor Speaker whose messages include the importance of respect, and tolerance. She believes in the power of positive thinking, creativity, and inner strength in overcoming adversity.

Supported in part by a grant from the Sandy Springs Society. 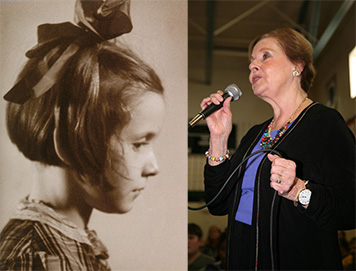