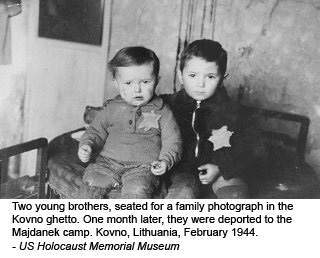 Two young brothers, seated for a family photograph in the Kovno ghetto. One month later, they were deported to the Majdanek camp. Kovno, Lithuania, February 1944. Children were especially vulnerable in the era of the Holocaust. The Nazis advocated killing children of "unwanted" or "dangerous" groups in accordance with their ideological views, either as part of the "racial struggle" or as a measure of preventative security.

The Germans and their collaborators killed children both for these ideological reasons and in retaliation for real or alleged partisan attacks. The Germans and their collaborators killed as many as 1.5 million children, including over a million Jewish children and tens of thousands of Romani (Gypsy) children, German children with physical and mental disabilities living in institutions, Polish children, and children residing in the occupied Soviet Union. The chances for survival for Jewish and some non-Jewish adolescents (13-18 years old) were greater, as they could be deployed at forced labor.

The fate of Jewish and non-Jewish children can be categorized in the following way: 1) children killed when they arrived in killing centers; 2) children killed immediately after birth or in institutions; 3) children born in ghettos and camps who survived because prisoners hid them; 4) children, usually over age 12, who were used as laborers and as subjects of medical experiments; and 5) those children killed during reprisal operations or so-called anti-partisan operations.

In the ghettos, Jewish children died from starvation and exposure as well as lack of adequate clothing and shelter. The German authorities were indifferent to this mass death because they considered most of the younger ghetto children to be unproductive and hence "useless eaters." Because children were generally too young to be deployed at forced labor, German authorities generally selected them, along with the elderly, ill, and disabled, for the first deportations to killing centers, or as the first victims led to mass graves to be shot. 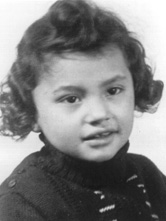 Upon arrival at Auschwitz-Birkenau and other killing centers, the camp authorities sent the majority of children directly to the gas chambers. SS and police forces in German-occupied Poland and the occupied Soviet Union shot thousands of children at the edge of mass graves. Sometimes the selection of children to fill the first transports to the killing centers or to provide the first victims of shooting operations resulted from the agonizing and controversial decisions of Jewish council (Judenrat) chairmen. The decision by the Judenrat in Lodz in September 1942 to deport children to the Chelmno killing center was an example of the tragic choices made by adults when faced with German demands. Janusz Korczak, director of an orphanage in the Warsaw ghetto, however, refused to abandon the children under his care when they were selected for deportation. He accompanied them on the transport to the Treblinka killing center and into the gas chambers, sharing their fate.

Non-Jewish children from certain targeted groups were not spared. Examples include Romani (Gypsy) children killed in Auschwitz concentration camp; 5,000 to 7,000 children killed as victims of the "euthanasia" program; children murdered in reprisals, including most of the children of Lidice; and children in villages in the occupied Soviet Union who were killed with their parents.

In their "search to retrieve 'Aryan blood,'" SS race experts ordered hundreds of children in occupied Poland and the occupied Soviet Union to be kidnapped and transferred to the Reich to be adopted by racially suitable German families. Although the basis for these decisions was "race-scientific," often blond hair, blue eyes, or fair skin was sufficient to merit the "opportunity" to be "Germanized." On the other hand, female Poles and Soviet civilians who had been deported to Germany for forced labor and who had had sexual relations with a German man -- often under duress -- resulting in pregnancy were forced to have abortions or to bear their children under conditions that would ensure the infant's death, if the "race experts" determined that the child would have insufficient German blood.

In spite of their acute vulnerability, many children discovered ways to survive. Children smuggled food and medicines into the ghettos, after smuggling personal possessions to trade for them out of the ghettos. Children in youth movements later participated in underground resistance activities. Many children escaped with parents or other relatives -- and sometimes on their own -- to family camps run by Jewish partisans.

Between 1938 and 1940, the Kindertransport (Children's Transport) was the informal name of a rescue effort which brought thousands of refugee Jewish children (without their parents) to safety in Great Britain from Nazi Germany and German-occupied territories. Some non-Jews hid Jewish children and sometimes, as in the case of Anne Frank, hid other family members as well. In France, almost the entire Protestant population of Le Chambon-sur-Lignon, as well as many Catholic priests, nuns, and lay Catholics, hid Jewish children in the town from 1942 to 1944. In Italy and Belgium, many children survived in hiding.

After the surrender of Nazi Germany, ending World War II, refugees and displaced persons searched throughout Europe for missing children. Thousands of orphaned children were in displaced persons camps. Many surviving Jewish children fled eastern Europe as part of the mass exodus (Brihah) to the western zones of occupied Germany, en route to the Yishuv (the Jewish settlement in Palestine). Through Youth Aliyah (Youth Immigration), thousands migrated to the Yishuv, and then to the state of Israel after its establishment in 1948.